ROSA’S TIPS
• Making the Most of the Market
• Wine Bars: A Corking Night Out

Looking for restaurants in Nice?

Visit our restaurant guide to Nice on our Nice Pebbles site

Bouillabaisse with the Stars

Since the 1950s Tétou has been one of the most famous restaurants on the Cote dAzur. A must for celebrities and normal folk, providing you can afford the price tag, this specialty fish restaurant is regarded as producing some of the best bouillabaisse in the world. So, we were delighted when our webmaster, Phil, and his wife Joyce, invited us to dinner there during their visit for the Cannes Film Festival. 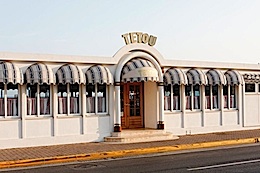 We were warned it would be difficult to get a table and so booked over a month in advance, and even then our first two choices of dates were refused. Typically, we were running late on the night and there were frantic phone calls to the restaurant as we span around the lanes praying that we wouldnt lose out table and disappoint our generous hosts. But all was well, and the uniformed car park attendant parked our car on the rather scruffy car park directly opposite the restaurant, a contrast to the line of limos and eager paparazzi waiting outside. I think our arrival disappointed them!

From the moment the door was opened we were greeted by the maître d and an atmospheric clamour of contented and eager diners  most with one eye on the conversation and the other elsewhere looking out for a recognizable face. Admittedly, we were no different. The glass mirrors cleverly positioned about the place help you look like a poised, sophisticated diner who can mingle with the best of them rather than the stargazer you really are. 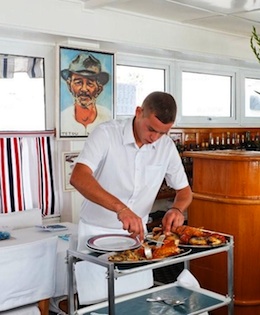 As well as an electric atmosphere, the setting is wonderful. Most of the tables are positioned to enjoy the fabulous view of the gentle lapping waves and sandy beach directly outside. Diners can choose to eat on the beachfront if preferred, with its tempting blue and white striped sun-loungers and a little restaurant-bar, but the real deal is definitely inside.

As it was our first visit, Matthew and I ordered the famous bouillabaisse and the only thing we think capable of accompanying this is a starter of the fresh melon  we knew wed need the room. Phil ordered turbot and Joyce bar.

The melon was succulent and juicy and there was plenty of it. The burnt-orange-coloured bouillabaisse was indeed the best we have ever tasted, extremely fresh and meaty: can tell it contains only the finest morsels of the days catch. Were told that in the broth made of mainly local fish there are John Dory, red mullet, scorpion fish and even lobster (if you want to upgrade  though there is really no need). 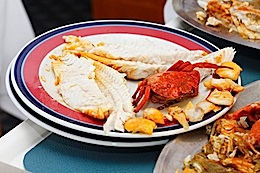 After finishing this feast, and even an hour later, I certainly was struggling to fit in what I knew would be a great dessert: the house special of freshly fried beignets with huge jars of dipping jams and fresh whipped cream. Needless to say, its all home-made. Flavours include apricot, plum, tomato, grapefruit, tomato and orange. I could only manage one beignet, but Matt, Joyce and Phil managed to polish off almost the lot. I took care of the towering glass of freshly prepared strawberries, though.

Even as we were leaving at around 11pm, the just-emptied tables where still filling up with big cheese from movie world. Before we left, Phil took me over to see the oil painting of Ernest Cirio, the founder of Tétou, which is proudly hung by the bar. Ernest Cirio opened this chef doeuvre in 1920 and it has been run by the same family ever since. They are certainly guarding the family heirloom well. Were sure it will continue to be THE place to go for the best fish and bouillabaisse.

Prices are steep, and cash is the only currency accepted, so come armed with a packed wallet. Expect to pay around 150 euros a head for dinner, or as we did, you can rely on the generosity of others. (Thanks Phil and Joyce for a spectacular night to remember!)

We might (understandably) think of bouillabaisse as a luxury dish, but this Provençal stew began as a humble fishermans lunch, made of the fish that were considered too modest to sell and cooked up next to the beach. Purists believe that the only authentic bouillabaisse is to be found in Marseille, source of the Mediterranean rockfish that traditionally go into the rust-coloured soup. Visit the Vieux Port in Marseille early in the morning and you will see fishermans wives hawking still-squirming fish straight off the boats, using language as colourful as the stew itself.

One restaurant famed for its bouillabaisse in Marseille is Miramar (12 quai du Port, 04 91 91 10 40, www.bouillabaisse.com), which along with several other local specialists has signed a charter guaranteeing the authenticity of the stew served here. This dish is presented in two courses  first the rich broth made of tomatoes, onions, olive oil, saffron, chili pepper and assorted fish  then the fillets. Its a filling dish, particularly when you add the traditional accompaniments of croutons, rouille (a spicy garlic, saffron and chili mayonnaise whose name means rust) and gruyere.

Great bouillabaisse is not easy to come by in Nice, but you will find a very good version at Les Pêcheurs (18 quai des docks, 04 93 89 59 61/www.lespecheurs.com), which appropriately faces the small wooden fishing boats on the port.