Still looking to book an apartment in Eze?
Here are three rental apartments in Eze near
Chèvre dOr.

ROSA’S TIPS
• Making the Most of the Market
• Wine Bars: A Corking Night Out

Looking for restaurants in Nice?

Visit our restaurant guide to Nice on our Nice Pebbles site

Out on the Town

Spring has been in a playful mood this year, getting our hopes up only to dash them like the wave that swept through our beach picnic yesterday, soaking us from head to toe. Yet the season started promisingly with a brilliant if chilly day in Eze Village, a little town 20 minutes from Nice that clings to the top of a craggy rock overlooking the sea.

My husband, Philippe and I came here on the first day of spring to have lunch at the Château de la Chèvre d'Or, named after an animal that frequently pops up in Provençal lore. Various tales explain how this old stone house came to be called La Chèvre d'Or, but what is certain is that the golden goat has prospered since Robert Wolf opened the restaurant in 1953. Now part of the Relais & Château chain, the Chèvre d'Or has transformed half the town into luxury accommodation, attracting wealthy Parisians in need of sun and tourists from all over the world. The hotel employs more than 100 staff to take care of its four restaurants and 34 rooms, which are scattered throughout the village.

I had heard nothing but good things about the food at La Chèvre d'Or before coming here, but with the restaurant freshly re-opened after its winter break who knew whether an unexpected wave might come crashing through this meal? 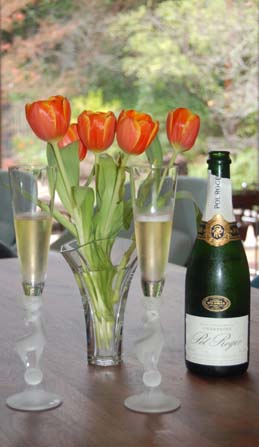 Chef Philippe Labbé put any fears to rest with cooking that walked a fine line between traditional and daring, never slipping too far one way or the other. I also couldn't help but notice that he shares my love of citrus, which endeared him to me throughout the meal. The Niçois ravioli (filled with beef and chard) with an avocado sauce vierge, seemed a slightly alarming idea at first but the chef pulled it off here with a good shot of acidity from lemon zest and juice. Surprising and delicious.

The meal's first course after the amuses-bouches involved different takes on sea urchin and caviar, as in an iced cocktail of fennel and spider crab jelly topped with sea urchin "tongues". Most intriguing of the three small dishes was a translucent sea water "raviole" with an intense sea urchin filling. I had visions - most likely inaccurate - of the chef hiking down the steep trail known as the Nietzsche path from the top of the village to the sea to collect water in a bucket.

I loved everything about la barbue sauvage, wild brill with spiky artichokes and a separate small dish of gamberoni with artichoke. Labbé deserves credit for showcasing an often underrated fish, rather than choosing the more obvious turbot or sole.

You might have heard of Bresse chicken, but did you know that the Bresse region also produces rabbits worthy of star chefs? The doll-sized rack of ribs alongside the stuffed saddle and confit shoulder was not for those who squirm at the thought of eating bunnies.

A thin slice of mango filled with iced vanilla cream was fabulous and we could have happily stopped there, but along came trio of desserts, the centerpiece of which was an extravagant layered chocolate and hazelnut cake. Alongside it was a praline cream with a crumbly apricot topping and a chilled coupe of coffee, lemon, chocolate and nougatine - all as rich and over-the-top as it sounds.

As you might expect the Château de la Chèvre d'Or is not a cheap place, but with set menus at 65 or 95 at lunch (180 at dinner) and spectacular plunging views of the sea, it's definitely worth a splurge. In summer the best seats are on the terrace, which gets a cool breeze even on the hottest days.

The future reputation of the Chèvre dOr hung in the balance when talented chef Jean-Marc Delacourt left the restaurant in 2003 taking his taking his two Michelin stars with him. Phillippe Labbe (1 Michelin star) was persuaded to take up the reins and from Rosas account seems to be doing a great job. We havent had the pleasure of dining here yet, but its certainly on our hit list. If you cant afford to stretch to the Chèvre dOr then a picnic at the tropical garden enjoying the panoramic views will still be a great dining experience.

Phil our webmaster says: My wife, Joyce, and I stayed two nights at the Chateaux and ate at Chèvre d'Or. The prix fixe menu was extraordinary! Joyce asked for no nuts or seeds in her food. Rather than eliminate them from the dishes, the kitchen prepared three special dishes for her without nuts. For example, for dessert, I got a marvelous chocolate concoction with nuts; Joyce got the most wonderful fresh apple soufflé. Our choice of wine didn't work and the waiter could tell. So he took the wine away and brought us the wine list to make another choice. There was a fellow dining alone. The waiter said he was enjoying their special meal-the entire lamb!