Cannes and Around Cannes


From the Suquet area

Public transport from the Suquet area

The Old Town, favoured by the locals and by us, is the cute cluster of picturesque streets which at the base include the streets between Boulevard Victor Tuby and Rue Georges Clemenceau to the East, and Boulevard Charles de Gaulle to the South and including the main streets of Rue Meynaider, Rue de Marche Forville, Rue Marechal Joffre and Rue jean de Riouffe.

A sharp contrast to the opulence and heady glamour of the modern Cannes, the Old Town offers the quintessentially French soul of Cannes. Here the character of Cannes is retained with fountains and pretty squares interspersed with bustling streets lined with sophisticated boutiques, wine merchants, restaurants, bars, delicatessens, butchers, bakers and fishmongers. The apartments above these long standing, often family enterprises, add their own charm with Provencal window boxes, washing lines and shutters.

Rue Meynadier, home to our rental apartment, Meynaider, is one of the main streets running through the base of the Old Town of Cannes. The cobbled street is full of local trade of restaurants and shops.

Every day except Monday the partly covered Forville Market, the biggest market in Cannes, draws the early bird chefs and connoisseurs to seek out the best of the best of the catch of the day, towering crates of succulent fruit and vegetables, olives, speciality cheeses, and jams brought to market from the mountain villages. By 1pm its all but over, so if you want to take some spoils back to your rental apartment, make sure you arrive early. On Mondays the Fortville market transforms in a bargain hunters paradise with antiques and bric a bric offered for sales. Expect to barter with the locals.

A cool retreat from the summer sun, you can lose yourself for a while and gently ascend the sloping paths leading you through quaint archways and passageways, flowery courtyards and winding stairways up towards the summit of Le Suquet where visitors flock to admire the view and visit the Musée de la Castre. 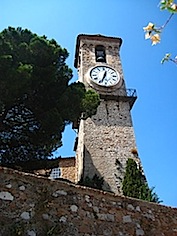 The top of Le Suquet hill affords unrivalled panoramic views of Cannes. For a romantic evening to remember, amble up to the summit in early evening when the glow from the lit streets below fuses with the natural sun set over the mountains. Then wander down to one of the high class restaurants and dine at an outside table on the sloping cobbled street with a bottle of rose or pink champagne. As well as being far more atmospheric than anything offered on the Croisette, the final bill is likely to be half the price.

During the hours of 10am to 6pm, at the top of Le Suquet, you can visit the Musée de la Castre. Open since 1952, the museum is located in the 12th Century Chapel of St Anne and it features Mediterranean and Middle Eastern artifacts. There are also nineteenth-century Cannes landscapes to admire from those who have captured the views already.

Also at the Le Suquet summit is the Eglise Notre-Dame d'Esperance, which dates back to the 17th Century and is set in well maintained gardens. Take a look at the locals tributes to the Virgin Mary with their thanksgiving plaques.

From the base of the Old Town of Cannes, it is just a five minute walk to the Port, and less than ten minutes to the Croisette and beach front. The Palais de Festival can be reached within a ten minute stroll. The train station is a five to ten minute walk away too, turning left of Marechal Joffre onto Rue Jean Jaures.