Public transport from the Croisette area

Cannes and Around Cannes

Running from the Port all the way across to Palm Beach, the famous Boulevard "La Croisette" stretches 2 km from the Palais des Festivals to the extravagant nightclub and casino, The Palm Beach.

The luxurious restaurant and club Baoli is found midway on this strip where movie stars a plenty gently sip their champagne under the stars and party the night away. Interspersed with the restaurants, grand hotels and the Casino are the sparkling windows of the main designer shops all waiting for your plastic. There is no denying that the high life is in full swing here; you can shop, dine, party and sunbathe in style. The Croisette is a place to see and be seen!

The luxurious shops lining this street make for some great shopping (or window shopping!) Designer fiends will be happy to come across designer shops such as Valentino, Armani, Prada, Louis Vuitton, Bvlgari and Dior.

If youre not up for shopping, why not pop on your Hollywood shades and people watch on one of the many terraces of cafés lining the Croisette. There are several places to choose from, including many ice-cream parlours such as Hagen Daas. 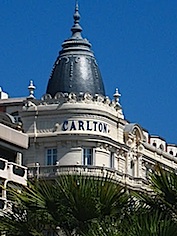 The Croisette is also home to some of the most luxurious hotels on the Riviera including the Martinez, the Carlton and the Majestic Barriére. Even if you are stayin gin one of our rental apartments in Cannes, these imposing hotels are tourist attractions in themselves. This is especially true during the festivals when crowds clamour round to catch a glimpse of a celebrity leaving the hotel.

The restaurants in the Croisette hotels are often run by a well known name in the culinary world, and if you want to be treated like a star for an evening, splash out on a meal (or a drink!) in one of these outstanding restaurants. The Palme dOr restaurant at the Hotel Martinez is particularly well known for its high quality.

The golden, sandy beach, stretching the length of the Croisette, is one of Cannes tourist attractions. Sand being preferred by many people to the natural pebbled beaches of the Côte dAzur, Cannes imports large quantities of sand every year, to ensure the beach is as luxurious as the town itself.

Unfortunately, a very large part of the beach is private, with sections belonging to restaurants and the various hotels lining the Croisette. However, you can still find places to soak up the sun without paying the earth. 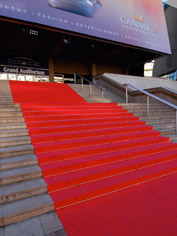 Throughout July and August the Croisette is a front row seats for the Festival Pyrotechnique, featuring spectacular firework displays from different countries and any other fireworks displays held in the bay throughout the year.

At the west end of the Croisette, youll find the famous Palais des Festivals, where the stars walk the red carpet, a scene youll recognise from worldwide television and press. While Cannes is known for its world famous film festival, there are all types of festivals held at the Palais des Festivals, from every sector imaginable, from television and photography to games and shopping. You can find out the dates for the main festivals on our Eventspage.

The Palais des Festivals et des Congrès is the hub of the conference enclave. In addition to worldwide business summits, cultural shows and music concerts you may find the Russian ballet passing through, rising popular music groups or a childrens theatre group. Its worth checking the listings on the Palais des Festivals website in case theres something for you whilst staying with us.

The streets directly north of the Croisette, all within a 10 minute walk of the Palais des Festivals, are the ideal location and our serviced apartments in Cannes are in high demand during the major conferences.

If you love the dance scene, head to the Rotonde Lérins section of the Palais for the months of July and August where this exceptional 2600m2 space boasting panoramic views of the bay, port, and Le Suquet becomes a world-renowned DJ club with private beach.