When people ask for directions for Rue Droite in the Old Town they are often seeking out the tiny Palais Lascaris or one of the well-regarded painters’ or sculptors’ studios. Whilst the tourists are admiring the window displays, the canny locals are brushing past to grab a table at one of the two hidden gems on the same pretty street—Acchiardo and Chez Palmyre. With no outside space and rather modest exteriors, both restaurants are easy to miss.

We have over ten holiday rental apartments in Nice very close by to these two simple restaurants. But even if your apartment in Nice is a little further out, it is still worth seeking them out.

Both of these restaurants are truly authentic and offer no fuss, simple and traditional Niçoise cuisine at very reasonable prices. Chez Palmyre is the cheaper of the two, but the menu is much more limited with just one or two options for each of three courses on the set €15. Acchiardo charges on average €6 for a starter and dessert and €9 for a main course. Both offer perfectly decent cheap wine.

Acchiardo is the larger restaurant with some 40 covers and a six-page menu including two set menus daily. Traditional wooden paneling, gingham tablecloths, and Nicois artifacts strewn around the dining area, including lobster chandeliers, all add to the Nicois atmosphere. It is always busy. This family is blessed with good genes as well as cooking and business acumen: you can expect to be served by good-looking waiters bearing the family name on their printed T-shirts.

Chez Palmyre by contrast is tiny and looks more like a strip-lit roadside café with one set menu of the day carefully scrolled in shaky ink and displayed outside. The décor (or lack of it) may put off the passing tourist, but do not be fooled! Chez Palmyre has been a well-respected restaurant for some 80 years here in Nice and we love that it proudly relies on its simply home cooked fare to do the talking. Again, it is hard to secure a table here, but if you do, you will love the way you feel like you have been invited by a local to Grandma’s house. 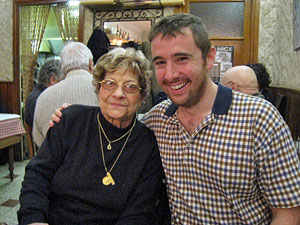 A few months back Matthew and I were eating at Chez Palmyre. Feeling pretty pleased with ourselves that we had secured the last table, we were tucking into our salade niçoise when there appeared to be a minor commotion from the tables around us before we were joined by a 94-year-old Niçois celebrity—Palmyre herself. Our table seemed to have a little more room for nudging over than others, so Palmyre joined us for her lunch. Not at all shy—well, it is her restaurant after all—she proceeded to tell us about the family history and talk us through the family framed photos on the wall.

Palmyre’s parents bought the restaurant when they moved from Italy when she was 10 years old and named it after her. Suzanne, her daughter, is now in her 70s and has been running the restaurant for many years now. The sad news is that they do not think Suzanne’s daughter will be old enough to take over the restaurant before Suzanne has to retire. We hope they manage to work something out since it would be a travesty for this little institution to disappear.

We cannot choose a favourite between these two; try them both and you will see what we mean. Eat in both if you can, or at the very least, do try one of them.

Usual sittings at both restaurants are at 12–12.30 for lunch and from 7pm in the evenings. It is very advisable to book ahead. Acchiardo is open every weekday but closed Saturday and Sunday and all of August. Chez Palmyre is closed Sunday and Monday.

Palmyre and Acchiardo are two of the best places in the Old Town to sample an authentic salade niçoise. Do not expect potatoes or green beans—both a sacrilege according to the locals. A true salade niçoise contains only raw ingredients—perhaps red or green pepper, cucumber, radishes, tomatoes, broad beans, and thinly sliced artichoke—alongside tuna (tinned, not fresh), anchovies, and hardboiled egg. There may be a little lettuce, but this salad is really about the crudités and not the leaves. Leftover salade niçoise goes into pan bagnat, a delicious picnic sandwich in a bread roll doused with olive oil and vinegar. You will find pan bagnats at most of the bakeries in the Old Town; one of the best is at La Fougasserie, near the Cours Saleya market.