A Burst of Nice Flavours

It’s been three years since I first visited La Merenda and the thing I love about it the most is the whole ethos of the way Dominic Le Stanc runs his restaurant. Despite his refusal to bow to modern expectations such as having no telephone (so no easy way to reserve), accepting strictly cash only, and closing on weekends, diners still flock here from all over the world and it is always difficult to grab one of the 12 tiny wooden tables with back-breaking wooden stools. 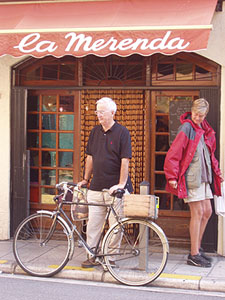 I’m often seduced by modern values of wanting both more materially and to be successful in my working life. Dominic reminds me that life isn’t supposed to be like that. He values what truly matters – earning enough to enjoy the gorgeous place he lives in and having a great love for what he does.

Dominic used to be the head chef at the Negresco’s infamous Chantecler with its airs and graces. He gave it all up to start La Merenda, which is the very antithesis of all he left behind – except for the thing that truly matters, the quality of the food he dishes up.

The menu, scribbled on a chalkboard, rarely changes, much to the delight of our web-designer and his wife. Phil and Joyce have been dining here for 15 years and tell us it’s still as good as ever. They are huge supporters of the Slow Food Movement and know their leeks from their onions.

A general description of the cuisine would be traditional peasant food. Starters for around 10 euros include coppa (Italian ham sliced paper thin), pissaladière (caramelized onion pizza) mussels, pasta with pistou (a local variation on pesto) and sardines farcies (sardines stuffed with Swiss chard).

Main dishes include Niçois tripe with tomatoes and peppers, sausages and lentils and the two specialties which really should be tried: daube (a beef and red wine stew with Provençal herbs) and stockfish (a fairly potent dish made from dried cod). Main dishes cost between 12-16 euros each.

There are usually only a couple of choices for dessert or you can have cheese instead. Drinks are water, coffee, or a bottle or glass of the local Côtes de Provence. No choice of producer, just a choice of colour, served chilled or served at room temperature.

If you want to sample Niçois cuisine at its best from one of the happiest chefs around, then La Merenda should be at the top of your “to do” list. Drop by to reserve a table when you arrive to avoid disappointment. You should also stick to a group of four or less unless you are prepared to dine separately. La Merenda is open Monday to Friday for lunch and dinner. It is very near to our holiday rental apartments "Alexandre Mari", "Francois" and "Opera Saleya".

One of the things I love about Nice is the Italian influence in the food. Over time porchetta, which in Italy is a whole deboned pig rolled with herbs and roasted, became a pig stuffed with every bit of its innards so that nothing goes to waste. Pizza became pissaladière, a humble tart made of oily bread dough, slowly-caramelized onions and seasoned anchovy paste (pissala in the local language). And that Genovese classic pesto became pistou, a sauce of basil, garlic, oil and parmesan in which pine nuts are noticeably absent.

Dominic Le Stanc serves the definitive version of Nice-style pâtes au pistou. I’ve eaten this dish here time and time again and have always marveled at its unctuous quality, the perfect melding of green pasta and green sauce. How does chef Dominic Le Stanc do it? There wasn’t much hope of him telling me, since he spent six months training with the old couple who ran this bistro in order to master their secret recipes. He has been kind enough to give me his recipe for daube, beef slowly imbued with wine and scented with porcini mushrooms (known as ceps in French), but when it comes to pistou his lips are firmly sealed.

Luckily, a few months ago one of the market stallholders introduced me to Jean himself, the former owner of La Merenda who still shops at the Cours Saleya market now and then. It couldn’t hurt to ask, I said to myself, and boldly blurted out, “So what is the secret of your pâtes au pistou?”

To my amazement, Jean was forthcoming. “It’s the cheese. You have to use emmental instead of parmesan to give the sauce its creaminess. When the pasta is cooked you drain it, but not too much, and then you toss it in the warmed bowl with the butter and pistou.” The butter??? I should have guessed. So often in France, when a dish is mysteriously delicious, butter turns out to be the key.

I’ve since made pâtes au pistou many times. My pâtes au pistou are very good indeed, though perhaps not quite as good as his. Maybe he uses a little more butter, maybe he sneaks in a little parmesan with the emmental, or maybe it’s just the way he tosses it (very vigorously). Whatever the slight difference, it’s what makes me not feel too guilty about giving away this recipe.