Sushi and Shiatsu Anyone?

After ten years in Paris, Nice sometimes feels like a small town despite being France's fifth-largest city and home to its second-busiest international airport. The longer I live here, though, the more I realize lies beneath the surface.

A few weeks ago, for instance, I would have sworn that there was no good sushi in Nice. It turns out that I just hadn't looked in the right place: a hidden courtyard in rue Ségurane, a street near the port that I often take on the way to yoga or my beloved Biocoop.

I might have continued to stroll obliviously past this unmarked doorway for months had it not been for my artist friend Stéphane, who let me in on the secret over coffee at the market. "But you can't just turn up by yourself," he said mysteriously. "You have to be invited." 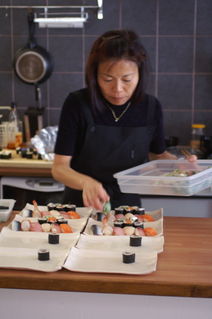 A secret sushi society in Nice? I was beside myself with suspense. A few days later I joined Stéphane, his wife Caterina and carefully selected friends for lunch at Bodhi Zen, whose curtained entrance reminded me instantly of Tokyo. In the front room the cook Etsuko works in an American-style open kitchen, while the back room is reserved for Shiatsu massages with Etsuko and Qi Gong with her French partner Wilfrid. Etsuko also cooks group dinners on request and teaches Japanese cooking on Saturday mornings. Four times a week she cooks lunch by reservation only, with homemade tofu on Mondays and Tuesdays, a "Zen bowl" (rice topped with whatever strikes her fancy that day) on Wednesdays and sushi on Fridays. The dining room seats no more than about a dozen people, most of them around a long, shared table.

The first thing that struck me was the generosity of Etsuko's sushi lunch, which is presented on a tray that includes 15 pieces of sushi and maki plus Japanese omelette, soup, salad from the Cours Saleya market and dessert (that day a grapefruit jelly made with agar agar). Next, I was thrilled by the variety and freshness of the fish: salmon and tuna make cameo appearances, but the real stars are local fish such as sardine and sea bream. Then I took a bite of maki and couldn't believe what I had tasted. Was that really Camembert? Indeed, Etsuko is not afraid to incorporate French flavors into her cooking, and another of her innovative sushis involves goat's cheese and chives (not bad!).

Since that first meal I've returned to Bodhi Zen twice, once for the tofu lunch and another time for a repeat of the sushi. I'm sorry that I didn't take my camera for the tofu lunch, since it was fascinating to see everything that Etsuko can do with fresh bean curd. It was the first time I had tasted homemade tofu, and the plain tofu in a little bamboo basket reminded me a bit of fresh curd cheese, with a grassier taste. Etsuko cooks almost entirely with organic ingredients, and I've already adopted her idea of topping any salad of mixed greens with three different seeds (perhaps pumpkin, sunflower and flax).

Now that I know Etsuko I seem to run into her every day at the Cours Saleya market. I admire her health-conscious approach to cooking, her willingness to experiment and her generosity: the tofu and Zen lunches cost 12 and the sushi lunch 17 for anyone with a membership (which costs 20 a year for the meals, 40 for a full membership). Part of me is reluctant to share this address, but my less selfish side knows that it's more important to support Etsuko's efforts than to hope that there will always be a place in the dining room for me.

Gayle says: From the street, you could easily miss this hidden gem. So be on the look out as you walk down Rue Ségurane and it is almost opposite the start of hill which leads to the Chateau. Weve just joined up and are looking forward to lunch next Friday. If you want to do the same, just call and say youd like to join the association. Please mention Rosa if you can. This way she might always have a space at the table now her secrets out!

Food critic and cookbook author Rosa Jackson moved to France from Canada in 1995 to work at the Cordon Bleu cooking school and run Paris Market Tours. Rosa loves the way of life on the French Riviera and has made Nice her home with her husband and five year old son.

Rosa has written two cookbooks, edited five editions of the Time Out Paris Eating and Drinking Guide, updated the dining chapters of the 2006 Time Out South of France and Fodor’s Provence and the Cote d’Azur guides and written about food for magazines and newspapers around the world.

As well as writing for Riviera Pebbles and for numerous other publications, she runs the custom-designed itinerary service edible-paris.com and through Les Petits Farcis offers market tours, cooking classes, and meet-the-producers tours. To read more about Rosa’s inspiring life in Nice and Paris, visit her food blog!

Riviera Pebbles is delighted to have her on board to share her knowledge and passion for the edible delights of the Riviera.