The Most Popular Bistro in Old Town Nice

If I had to describe my ideal restaurant, I would speak of good, simple bistro food at moderate prices, served in a relaxed setting by a team of professionals who love their work. Given that the Bistrot dAntoine meets all of these criteria, its no wonder that it has become the most popular bistro in the Old Town. 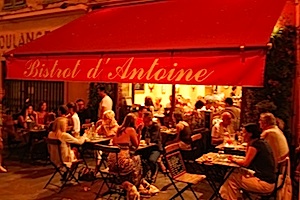 Formerly a scruffy locals haunt serving Niçois specialities, the Bar Antoine closed for a complete overhaul a couple of years ago. New owner Armand Crespo, formerly of Lou Cigalon in Valbonne, changed the word bar to bistrot (though the name on the original façade remains), brightened the two-level dining room considerably, and added an open kitchen where you can see the cheerful cooks at work. I often run into him at the Cours Saleya market, where I might find him picking up bunches of borage flowers to decorate the plates, or crisp young fennel and skinny carrots to serve with the salmon gravlax (one of my favourite dishes here).

I should admit at this point that I wasnt entirely convinced by my first meal here. The pâtes au pistou came tossed with fresh white beans known as cocos and, to my mind, a sauce that was too light on the basil. I was also a little underwhelmed by the vitello tonnato, a classic Italian dish of thin slices of veal topped with tuna paste. It was months before I returned, and then I was stunned to realise what I had been missing. The gravlax was both silky and crunchy, the duck magret had crispy skin and rosy pink meat with just the right dose of salt. The simple accompaniments of a sliced roasted potato and a spoonful of celeriac purée were all it needed. Sitting in the main floor dining room, I admired the tiny ceramic figures along the wall, the work of a local artist.

I have now become a regular at the Bistrot dAntoine and rarely have I gone wrong: two of the best recent dishes were a cast-iron pot of artichokes with cubes of Lyonnais sausage, and pork cheeks in red wine sauce with white polenta. There isnt much on the menu for vegetarians besides the pâtes au pistou, but there are usually a couple of fish dishes, including a beautiful seared tuna steak. Keep in mind that the menu isnt limited to what you see on the blackboard outside; there is a second blackboard listing the daily specials.

The well-priced wines starting at 13 have a lot to do with the popularity of this restaurant, and recently Ive enjoyed the Sauvignon de Touraine and a very light Beaujolais that thankfully was not nouveau. With first courses at 8 or 9 and main courses mostly around 12, its easy to understand why Bistrot dAntoine is often booked up several nights ahead for its two evening sittings. I like the boisterous main floor dining room, but for a more romantic meal you might like to head upstairs to the quieter room with its old coal stove (which is not in use) and well-spaced tables. In summer there is also a pleasant terrace, if you dont mind cigarette smoke.

Food critic and cookbook author Rosa Jackson moved to France from Canada in 1995 to work at the Cordon Bleu cooking school and run Paris Market Tours. Rosa loves the way of life on the French Riviera and has made Nice her home with her husband and five year old son.

Rosa has written two cookbooks, edited five editions of the Time Out Paris Eating and Drinking Guide, updated the dining chapters of the 2006 Time Out South of France and Fodor’s Provence and the Cote d’Azur guides and written about food for magazines and newspapers around the world.

As well as writing for Riviera Pebbles and for numerous other publications, she runs the custom-designed itinerary service edible-paris.com and through Les Petits Farcis offers market tours, cooking classes, and meet-the-producers tours. To read more about Rosa’s inspiring life in Nice and Paris, visit her food blog!

Riviera Pebbles is delighted to have her on board to share her knowledge and passion for the edible delights of the Riviera.